The Central line is a London Underground line that runs through central London, from Epping, Essex, in the north-east to Ealing Broadway and West Ruislip in the west. Coloured red on the Tube map, the line serves 49 stations over 46 miles (74 km). It is one of only two lines on the Underground network to cross the Greater London boundary, the other being the Metropolitan line. One of London's deep-level railways, Central line trains are smaller than those on British main lines.

The line was opened as the Central London Railway in 1900, crossing central London on an east-west axis, as the third deep-level Tube line to be built after electric trains made them possible. It was later extended to the western suburb of Ealing. After the Second World War, the line was expanded considerably into the recently constructed suburbs, taking over steam-hauled outer-suburban routes to the borders of London and beyond to the east. This realised plans that had been delayed by the war, when construction stopped and the unused tunnels were used as air-raid shelters and factories. However, suburban growth proved to be less than expected, and of the planned expansions one (to Denham, Buckinghamshire) was cut short due to its location in the Metropolitan Green Belt and another (to Ongar) ultimately closed in 1994 due to low patronage; the section between Epping and Ongar later became part of the Epping Ongar Railway. The Central line has mostly been operated by automatic train operation since a major refurbishment in the 1990s, although all trains still carry drivers. Many of its stations are of historic interest, from turn-of-the-century Central London Railway buildings in west London to post-war modernist designs on the West Ruislip and Hainault branches, as well as Victorian-era Eastern Counties Railway and Great Eastern Railway buildings east of Stratford, from when the line to Epping was a rural branch line.

In terms of total passengers, the Central line is the second busiest on the Underground. In 2016/17 over 280 million passenger journeys were recorded on the line. It currently operates the second-most frequent service on the network, with 34 trains per hour (tph) operating for half-an-hour in the westbound direction during the morning peak, and between 27 and 30 tph during the rest of the peak. This makes the Central line the busiest and most intensively-used railway line in the United Kingdom: it is the only Tube line running east-west through the central core of London, running under Oxford Street and the financial centre of the City of London. Crossrail, due to begin most of its core operation in late 2020 or early 2021,will provide interchange with the Central line at Stratford, Liverpool Street, Tottenham Court Road, Bond Street and Ealing Broadway. relieving overcrowding in these areas by providing passengers travelling longer distances with faster, and hence more desirable, services, leaving the Central line to only handle passengers making shorter journeys in Central London. 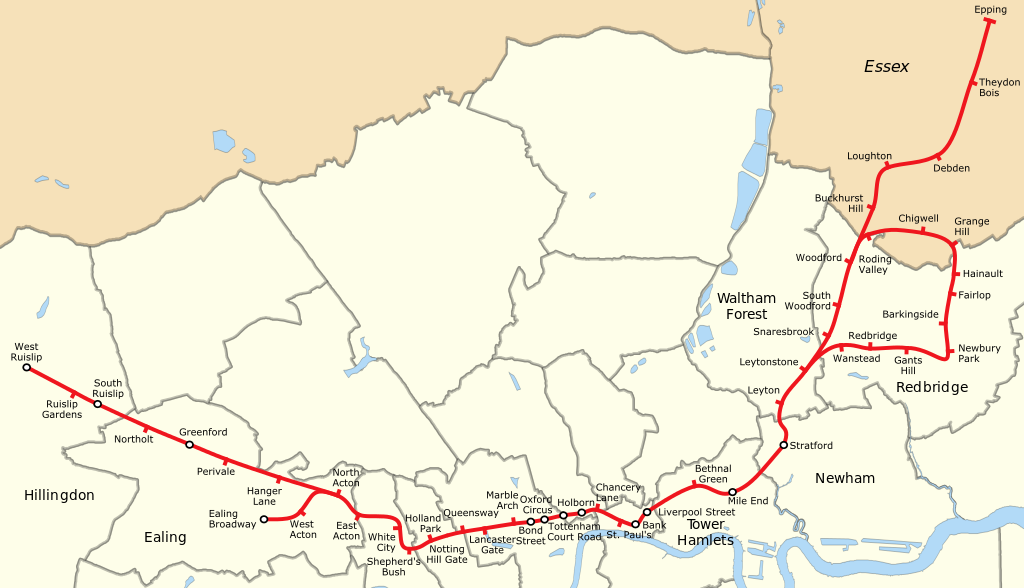