The Circle line is a London Underground line in a spiralling shape, running from Hammersmith in the west to Edgware Road and then looping around central London back to Edgware Road. The railway is below ground in the central section and on the loop east of Paddington. Unlike London's deep-level lines, the Circle line tunnels are just below the surface and are of similar size to those on British main lines. Coloured yellow on the Tube map, the 17-mile (27 km) line serves 36 stations, including most of London's main line termini. Almost all of the route, and all the stations, are shared with one or more of the three other sub-surface lines, namely the District, Hammersmith & City and Metropolitan lines. On the Circle and Hammersmith & City lines combined, over 114 million passenger journeys were recorded in 2011/12.

The first section became operational in 1863 when the Metropolitan Railway opened the world's first underground line between Paddington and Farringdon with wooden carriages and steam locomotives. The same year a select committee report recommended an "inner circle" of lines connecting the London railway termini, and the Metropolitan District Railway (commonly known as the District Railway) was formed to build the southern portion of the line.

In 1871 services began between Mansion House and Moorgate via Paddington, jointly operated by the two companies. Due to conflict between the two companies it was not until October 1884 that the inner circle was completed. The line was electrified in 1905, and in 1933 the companies were amalgamated into the London Passenger Transport Board. In 1949 the Circle line appeared as a separate line for the first time on the Tube map. In 2009 the closed loop around the centre of London on the north side of the River Thames was broken at Edgware Road and extended west to become a spiral to Hammersmith.

The signalling system is being upgraded. The C Stock trains were replaced in 2014 by new seven-car S Stock trains, in a programme completed in 2015. 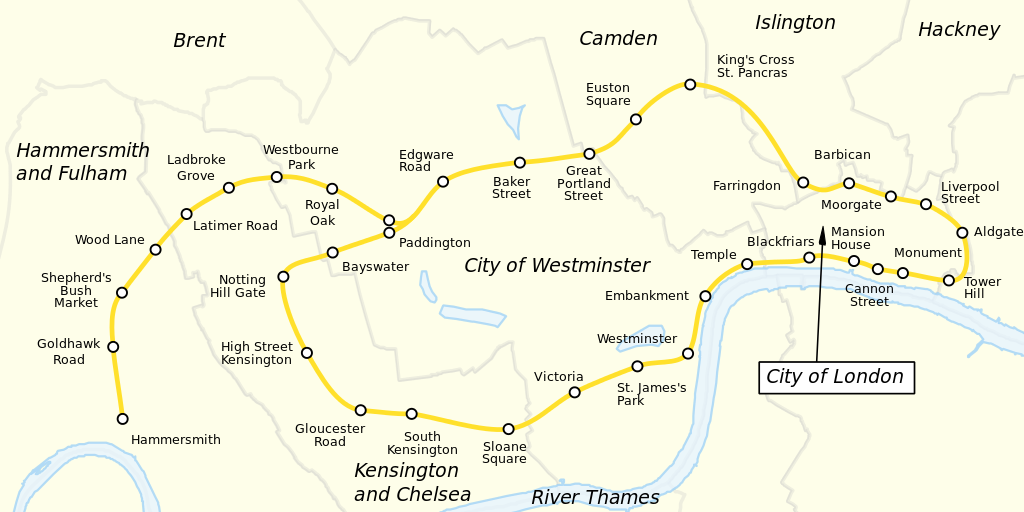