The Metropolitan line, colloquially known as the Met, is a London Underground line between Aldgate in the City of London and Amersham and Chesham in Buckinghamshire, with branches to Watford in Hertfordshire and Uxbridge in Hillingdon. Coloured magenta on the tube map, the line is 41.4 miles (66.7 km) in length and serves 34 stations. Between Aldgate and Finchley Road the track is mostly in shallow "cut and cover" tunnels, apart from short sections at Barbican and Farringdon stations. The rest of the line is above ground, with a loading gauge of a similar size to those on main lines. Just under 67 million passenger journeys were made on the line in 2011/12.

The line is one of just two Underground lines to cross the Greater London boundary (the other being the Central line). It is the only Underground line with an express service at peak times; the resulting longer distance between stations means trains can achieve the system's highest speeds of over 60 miles per hour (100 km/h) on some sections.

In 1863 the Metropolitan Railway began the world's first underground railway between Paddington and Farringdon with wooden carriages and steam locomotives, but its most important route became the line north into the Middlesex countryside, where it stimulated the development of new suburbs. Harrow was reached in 1880, and ultimately the line continued as far as Verney Junction in Buckinghamshire, more than 50 miles (80 km) from Baker Street. From the end of the 19th century, the railway shared tracks with the Great Central Railway out of Marylebone. The central London lines were electrified by 1907 but electric locomotives were exchanged for steam locomotives on trains heading north of Harrow. After the railway was absorbed by the London Passenger Transport Board in 1933 the line was cut back to Aylesbury. Steam trains ran until 1961, when the line was electrified to and services were curtailed at Amersham. The Hammersmith & City line was shown on the tube map as a part of the Metropolitan line until 1990, when it appeared as a separate line. The current S8 Stock trains entered service between 2010 and 2012, replacing the A Stock trains, that served the line since 1961.

The section between Aldgate and Baker Street is shared with the Circle and Hammersmith & City sub-surface lines; between Rayners Lane and Uxbridge with the Piccadilly line; and between Harrow-on-the-Hill and Amersham with the Chiltern Railways London to Aylesbury Line. Baker Street is the southbound terminus for some trains not continuing to Aldgate. Most of the route has two tracks, except for the single-track Chesham branch and a four-track section between Wembley Park and Moor Park that allows fast and semi-fast services to overtake "all stations" trains. There are four tracks between Wembley Park and Finchley Road, but only the outer ones are used by the Metropolitan line's non-stop trains: the inner pair was transferred to the Bakerloo line in 1939 (becoming the Jubilee line in 1979) with services calling at all stations. The disused Metropolitan line platforms at Willesden Green and Neasden are still in place despite Metropolitan line services having been withdrawn in 1940. 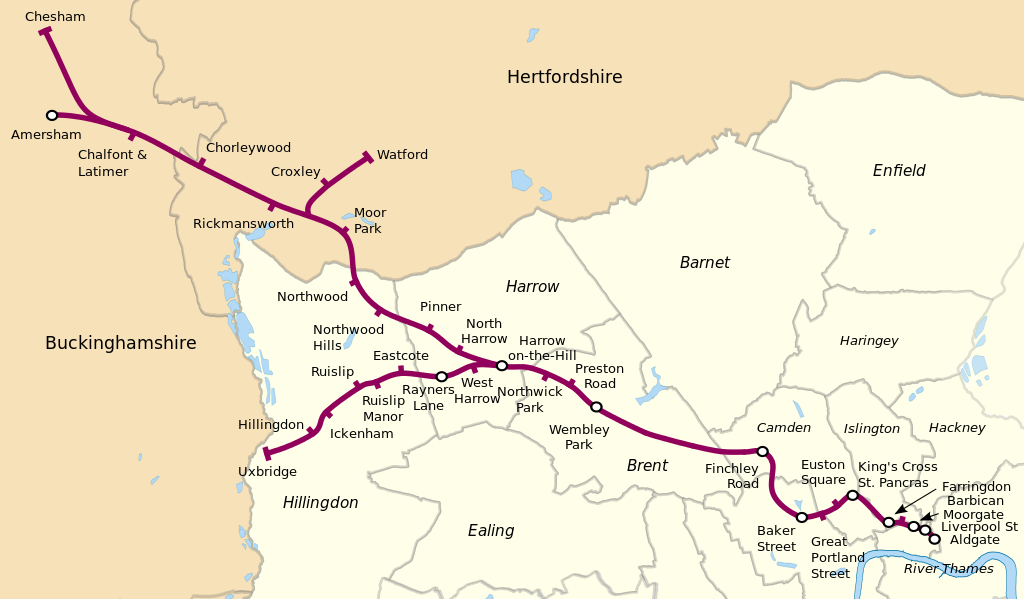