The Piccadilly line is a deep level London Underground line running from the north to the west of London. It has two branches, which split at Acton Town, and serves 53 stations. The line is known for serving Heathrow Airport, and is near popular attractions such as Buckingham Palace. The District and Metropolitan lines share some sections of tracks with the Piccadilly line. Coloured dark blue (officially "Corporate Blue", Pantone 072) on the Tube map, it is the fourth-busiest line on the Underground network with over 210 million passenger journeys in 2011/12.

The first section, between Finsbury Park and Hammersmith, was opened in 1906 as the Great Northern, Piccadilly and Brompton Railway (GNP&BR). The station tunnels and buildings were designed by Leslie Green, featuring ox-blood terracotta facades with semi-circular windows on the first floor. When Underground Electric Railways of London (UERL) took over the line, it was renamed the Piccadilly line. Subsequent extensions were made to Cockfosters, Hounslow West and Uxbridge in the early 1930s, when many existing stations on the Uxbridge and Hounslow branches were rebuilt to designs by Charles Holden, part of the Adams, Holden & Pearson architectural practice. These were generally rectangular, with brick bases and large tiled windows, topped with a concrete slab roof. The western extensions took over existing District line services, which were fully withdrawn in 1964.

Stations in central London were rebuilt to cater to higher volumes of passenger traffic. To prepare for World War II, some stations were equipped with shelters and basic amenities; others were equipped with blast walls. Construction of the Victoria line, the first section of which was opened in 1968, helped to relieve congestion on the Piccadilly line, but some sections of the Piccadilly had to be rerouted for cross-platform interchange with the new line. Several plans were made to extend the Piccadilly line to serve Heathrow Airport. The earliest approval was given in 1967, and the Heathrow extension opened in stages between 1975 and 1977. This extension served only Terminals 2 and 3 and the former Terminal 1. The line was extended again twice, to Terminal 4 via a loop in 1986, and to Terminal 5 directly from the main terminal station in 2008.

This line has two depots, at Northfields and Cockfosters, with a group of sidings at several locations. Crossovers are at a number of locations, with some allowing for trains to switch onto different lines. The Piccadilly line once had its electricity generated from Lots Road Power Station. It was, however, taken out of use in 2003, leaving the line with supply from the National Grid Network. The 1973 stock serves the tube line, where 78 of these are needed to have a 24 trains per hour (tph) (a train every 2˝ minutes) service during peak hours. These are due to be replaced by the New Tube for London (NTfL) trains in the 2020s. 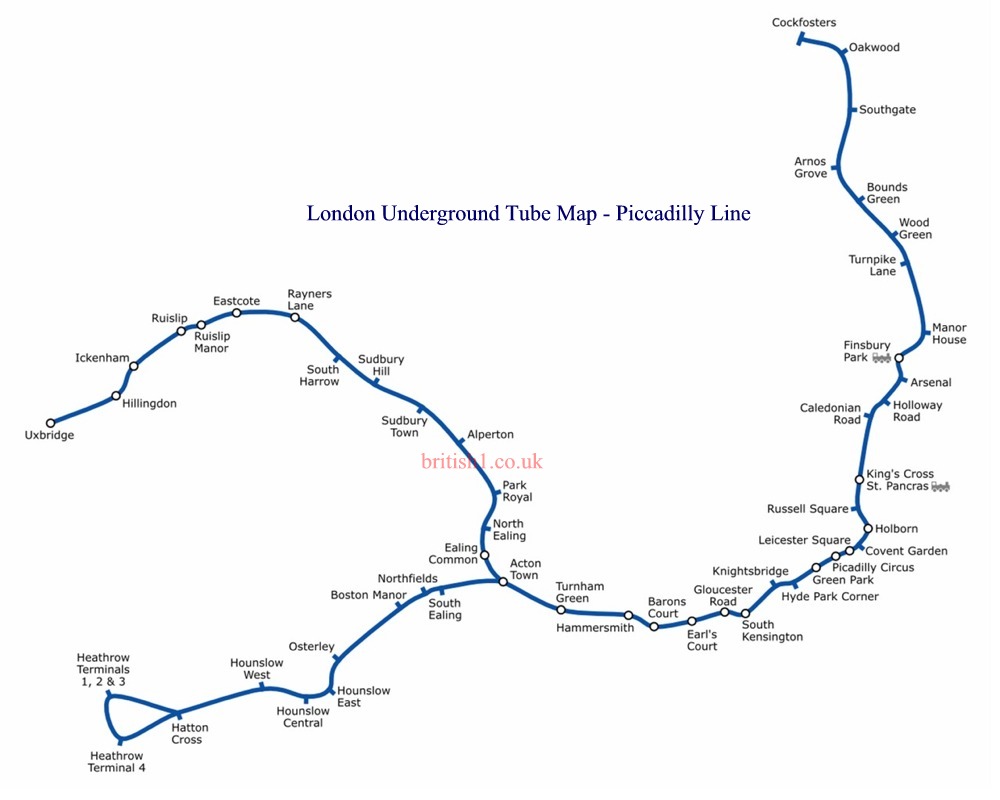