Welcome to our Cheshire map page. The map of Cheshire England that is located below is provided by Google Maps. You can "grab" the electronic map and move it around to re-center the map. You can change between standard map view and satellite map view by clicking the small square on the bottom left-hand corner of the map. Satellite map view utilises orbiting satellite and / or aerial high-resolution photography to display images of the map location to street level detail (really quite amazing). Standard map view shows a traditional street map (also known as a road map). You can use the zoom buttons on the bottom right-hand side of the map to zoom in or out to street level detail. We have digital online maps for most towns and cities on the Maps of England page. We also have a good collection of old school printable maps on the Maps of England page.

A map of Cheshire, England

I hope you like the Cheshire County, England street map / road map situated above.

Cheshire archaically the County Palatine of Chester, is a county in northwest England. It is bordered by Merseyside and Greater Manchester to the north, Derbyshire to the east, Staffordshire and Shropshire to the south, and the Welsh settlements of Flintshire and Wrexham to the west. Cheshire's county town is Chester, while its largest town by population is Warrington.[4] Other major towns include Crewe, Ellesmere Port, Macclesfield, Northwich, Runcorn, Widnes, Wilmslow, and Winsford.

The county covers 905 square miles (2,344 km2) and has a population of around 1 million. It is mostly rural, with a number of small towns and villages supporting the agricultural and other industries which produce Cheshire cheese, salt, chemicals, and silk. It is split into the administrative districts of Cheshire West and Chester, Cheshire East, Halton, and Warrington.

Cheshire's name was originally derived from an early name for Chester, and was first recorded as Legeceasterscir in the Anglo-Saxon Chronicle, meaning "the shire of the city of legions". Although the name first appears in 980, it is thought that the county was created by Edward the Elder around 920. In the Domesday Book, Chester was recorded as having the name Cestrescir (Chestershire), derived from the name for Chester at the time. A series of changes that occurred as English itself changed, together with some simplifications and elision, resulted in the name Cheshire, as it occurs today.

Because of the historically close links with the land bordering Cheshire to the west, which became modern Wales, there is a history of interaction between Cheshire and North Wales. The Domesday Book records Cheshire as having two complete Hundreds (Atiscross and Exestan) that later became the principal part of Flintshire. Additionally, another large portion of the Duddestan Hundred later became known as Maelor Saesneg when it was transferred to North Wales. For this and other reasons, the Welsh language name for Cheshire (Swydd Gaerlleon) is sometimes used.

After the Norman conquest of 1066 by William I, dissent and resistance continued for many years after the invasion. In 1069 local resistance in Cheshire was finally put down using draconian measures as part of the Harrying of the North. The ferocity of the campaign against the English populace was enough to end all future resistance. Examples were made of major landowners such as Earl Edwin of Mercia, their properties confiscated and redistributed amongst Norman barons.

The earldom was sufficiently independent from the kingdom of England that the 13th-century Magna Carta did not apply to the shire of Chester, so the earl wrote up his own Chester Charter at the petition of his barons.

William I made Cheshire a county palatine and gave Gerbod the Fleming the new title of Earl of Chester. When Gerbod returned to Normandy in about 1070, the king used his absence to declare the earldom forfeit and gave the title to Hugh d'Avranches (nicknamed Hugh Lupus, or "wolf"). Because of Cheshire's strategic location on the Welsh Marches, the Earl had complete autonomous powers to rule on behalf of the king in the county palatine.

Cheshire in the Domesday Book (1086) is recorded as a much larger county than it is today. It included two hundreds, Atiscross and Exestan, that later became part of North Wales. At the time of the Domesday Book, it also included as part of Duddestan Hundred the area of land later known as English Maelor (which used to be a detached part of Flintshire) in Wales. The area between the Mersey and Ribble (referred to in the Domesday Book as "Inter Ripam et Mersam") formed part of the returns for Cheshire. Although this has been interpreted to mean that at that time south Lancashire was part of Cheshire, more exhaustive research indicates that the boundary between Cheshire and what was to become Lancashire remained the River Mersey. With minor variations in spelling across sources, the complete list of hundreds of Cheshire at this time are: Atiscross, Bochelau, Chester, Dudestan, Exestan, Hamestan, Middlewich, Riseton, Roelau, Tunendune, Warmundestrou and Wilaveston.

There were 8 feudal baronies in Chester, the barons of Kinderton, Halton, Malbank, Mold, Shipbrook, Dunham-Massey, and the honour of Chester itself. Feudal baronies or baronies by tenure were granted by the Earl as forms of feudal land tenure within the palatinate in a similar way to which the king granted English feudal baronies within England proper. An example is the barony of Halton. One of Hugh d'Avranche's barons has been identified as Robert Nicholls, Baron of Halton and Montebourg.

In 1182, the land north of the Mersey became administered as part of the new county of Lancashire, resolving any uncertainty about the county in which the land "Inter Ripam et Mersam" was. Over the years, the ten hundreds consolidated and changed names to leave just seven—Broxton, Bucklow, Eddisbury, Macclesfield, Nantwich, Northwich and Wirral.

Principality: Merging of Palatine and Earldom

In 1397 the county had lands in the march of Wales added to its territory, and was promoted to the rank of principality. This was because of the support the men of the county had given to King Richard II, in particular by his standing armed force of about 500 men called the "Cheshire Guard". As a result, the King's title was changed to "King of England and France, Lord of Ireland, and Prince of Chester". No other English county has been honoured in this way, although it lost the distinction on Richard's fall in 1399.

Halton and Warrington became unitary authorities independent of Cheshire County Council on 1 April 1998, but remain part of Cheshire for ceremonial purposes and also for fire and policing.

A referendum for a further local government reform connected with an elected regional assembly was planned for 2004, but was abandoned. 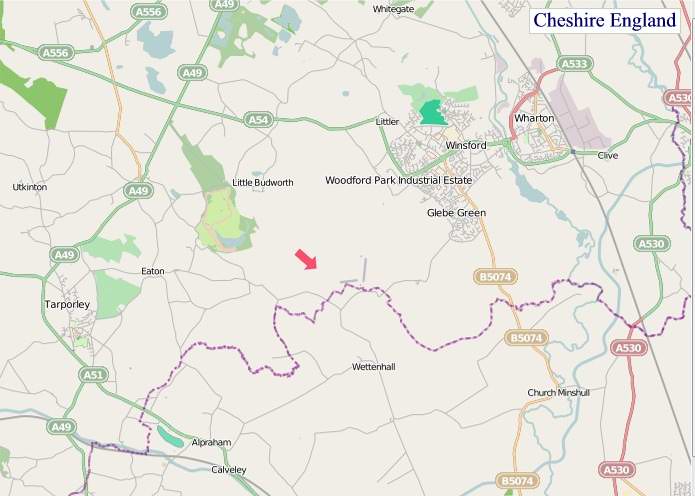 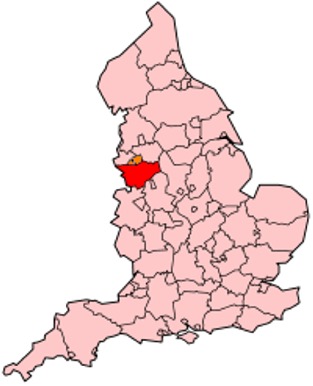 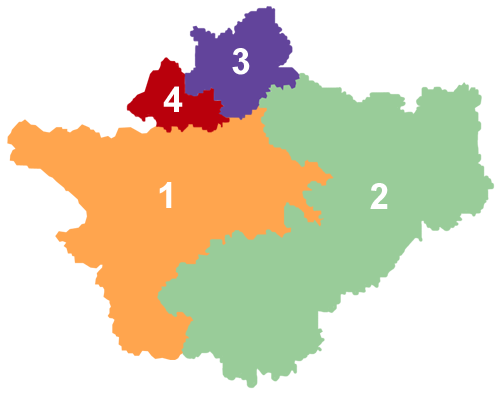