Welcome to our Leicestershire map page. The map of Leicestershire England that is located below is provided by Google Maps. You can "grab" the electronic map and move it around to re-center the map. You can change between standard map view and satellite map view by clicking the small square on the bottom left-hand corner of the map. Satellite map view utilises orbiting satellite and / or aerial high-resolution photography to display images of the map location to street level detail (really quite amazing). Standard map view shows a traditional street map (also known as a road map). You can use the zoom buttons on the bottom right-hand side of the map to zoom in or out to street level detail. We have digital online maps for most towns and cities on the Maps of England page. We also have a good collection of old school printable maps on the Maps of England page.

A map of Leicestershire, England

I hope you like the Leicestershire County, England street map / road map situated above.

Leicestershire takes its name from the city of Leicester located at its centre and administered separately from the rest of the county. The ceremonial county – the non-metropolitan county plus the city of Leicester – has a total population of just over 1 million (2016 estimate), more than half of which lives in the Leicester Urban Area.

Leicestershire was recorded in the Domesday Book in four wapentakes: Guthlaxton, Framland, Goscote and Gartree. These later became hundreds, with the division of Goscote into West Goscote and East Goscote, and the addition of Sparkenhoe hundred. In 1087, the first recorded use of the name was as Lægrecastrescir.

Leicestershire's external boundaries have changed little since the Domesday Survey. The Measham-Donisthorpe exclave of Derbyshire has been exchanged for the Netherseal area, and the urban expansion of Market Harborough has caused Little Bowden, previously in Northamptonshire to be annexed.

In 1974, the Local Government Act 1972 abolished the county borough status of Leicester city and the county status of neighbouring Rutland, converting both to administrative districts of Leicestershire. These actions were reversed on 1 April 1997, when Rutland and the City of Leicester became unitary authorities. Rutland became a distinct Ceremonial County once again, although it continues to be policed by Leicestershire Constabulary.

The symbol of the county council, Leicestershire County Cricket Club and Leicester City FC, is the fox. Leicestershire is considered to be the birthplace of fox hunting as it is known today. Hugo Meynell, who lived in Quorn, is known as the father of fox hunting. Melton Mowbray and Market Harborough have associations with fox hunting, as has neighbouring Rutland.

Leicestershire is the only historic county of England lacking a registered flag. A design was proposed for Leicestershire in 2017 based on symbols associated with the county – a fox and a cinquefoil.

The River Soar together with its tributaries and canalisations constitutes the principal river basin of the county, although the River Avon and River Welland through Harborough and along the county's southern boundaries are also significant. The Soar rises between Hinckley and Lutterworth, towards the south of the county near the Warwickshire border, and flows northwards, bisecting the county along its north–south axis, through 'Greater' Leicester and then to the east of Loughborough where its course within the county comes to an end. It continues north marking the boundary with Nottinghamshire in the Borough of Rushcliffe for some 10 kilometres (6.2 mi) before joining the River Trent at the point where Derbyshire, Leicestershire, and Nottinghamshire meet.

The geographical centre of England is in Leicestershire, near Fenny Drayton in the southwest of the county. In 2013, the Ordnance Survey calculated that the point was on land at Lindley Hall Farm; Meriden, around 10 miles (16 km) to the southwest, had been considered the traditional centre for more than 500 years.

A large part of the north-west of the county, around Coalville, forms part of the new National Forest area extending into Derbyshire and Staffordshire. The highest point of the county is Bardon Hill at 278 metres (912 ft), which is also a Marilyn; with other hilly/upland areas of c. 150–200 metres (490–660 ft) and above in nearby Charnwood Forest and also to the east of the county around Launde Abbey. The lowest point, at an altitude of about 20 metres (66 ft), is located at the county's northernmost tip close to Bottesford where the River Devon flowing through the Vale of Belvoir leaves Leicestershire and enters Nottinghamshire. This results in an altitude differential of around 257.5 metres (845 ft) and a mean altitude of 148.75 metres (488.0 ft). 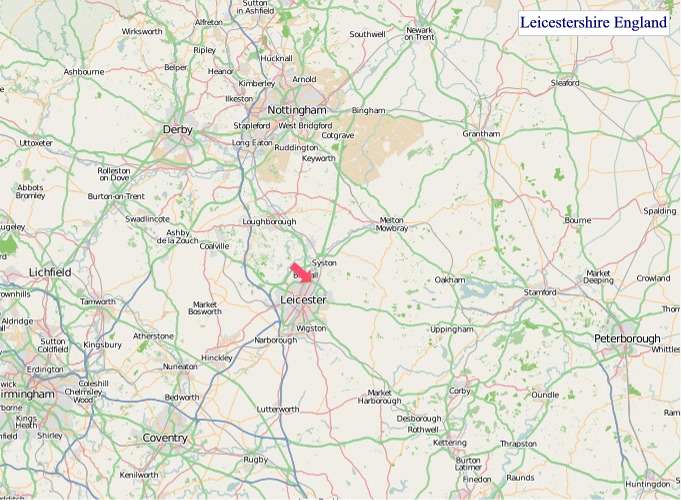 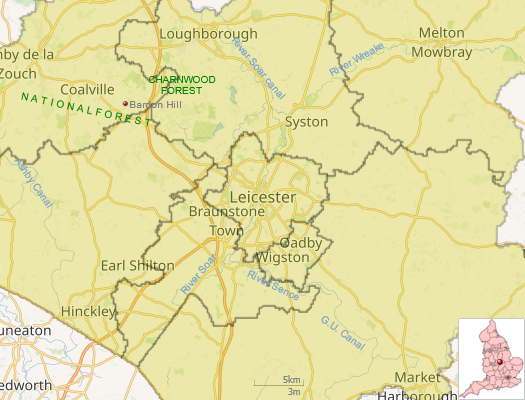 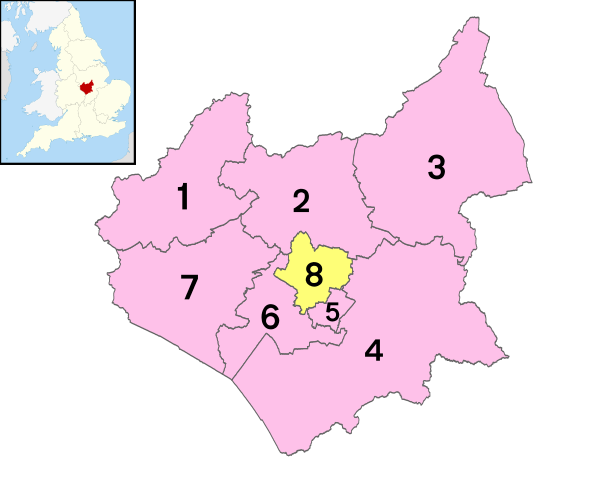