The Battle of Agincourt was an English victory against a much larger French army in the Hundred Years' War. The battle occurred on Friday 25 October 1415 (Saint Crispin's Day), in northern France. Henry V's victory started a new period in the war, in which Henry married the French King's daughter and his son was made heir to the throne of France, but his achievement was squandered by his heirs.

The French king of the time was Charles VI; however, he did not command the French army himself as he was incapacitated. Instead the French were commanded by Constable Charles d'Albret and various prominent French noblemen of the Armagnac party.

The battle is notable for the use of the English longbow, which Henry used in very large numbers, with longbowmen forming the vast majority of his army. The battle is the centrepiece of the play Henry V, by William Shakespeare. 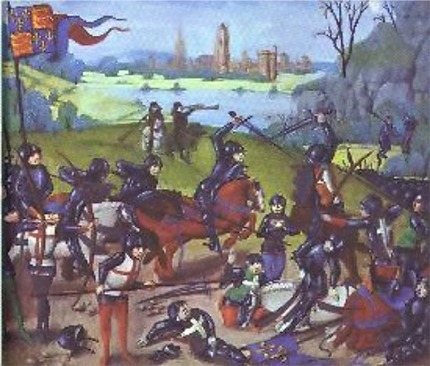 Fifteenth-century miniature depicting the English victory over France at the Battle of Agincourt 1415.