Elizabeth I of England
Armada Portrait

Elizabeth I (7 September 1533 - 24 March 1603) was Queen of England and Queen of Ireland from 17 November 1558 until her death. Sometimes called The Virgin Queen, Gloriana, or Good Queen Bess, Elizabeth was the fifth and last monarch of the Tudor dynasty. The daughter of Henry VIII, she was born a princess, but her mother, Anne Boleyn, was executed three years after her birth, and Elizabeth was declared illegitimate. Her brother, Edward VI, cut her out of the succession. His will, however, was set aside, and in 1558 Elizabeth succeeded her half-sister, the Catholic Mary, during whose reign she had been imprisoned for nearly a year on suspicion of supporting Protestant rebels.

Elizabeth set out to rule by good counsel, and she depended heavily on a group of trusted advisers led by William Cecil, Baron Burghley. One of her first moves as queen was to support the establishment of an English Protestant church, of which she became the Supreme Governor. This Elizabethan Religious Settlement held firm throughout her reign and later evolved into today's Church of England. It was expected that Elizabeth would marry, but despite several petitions from parliament, she never did. The reasons for this choice are unknown, and they have been much debated. As she grew older, Elizabeth became famous for her virginity, and a cult grew up around her which was celebrated in the portraits, pageants and literature of the day.

In government, Elizabeth was more moderate than her father and siblings. One of her mottoes was "video et taceo" ("I see, and say nothing"). This strategy, viewed with impatience by her counsellors, often saved her from political and marital misalliances. Though Elizabeth was cautious in foreign affairs and only half-heartedly supported a number of ineffective, poorly resourced military campaigns in the Netherlands, France and Ireland, the defeat of the Spanish armada in 1588 associated her name forever with what is popularly viewed as one of the greatest victories in English history. Within 20 years of her death, she was being celebrated as the ruler of a golden age, an image that retains its hold on the English people. Elizabeth's reign is known as the Elizabethan era, famous above all for the flourishing of English drama, led by playwrights such as William Shakespeare and Christopher Marlowe, and for the seafaring prowess of English adventurers such as Francis Drake, John Hawkins and Walter Raleigh.

Historians, however, tend to be more cautious in their assessment. They often depict Elizabeth as a short-tempered, sometimes indecisive ruler, who enjoyed more than her share of luck. Towards the end of her reign, a series of economic and military problems weakened her popularity to the point where many of her subjects were relieved at her death. Elizabeth is, however, acknowledged as a charismatic performer and a dogged survivor, in an age when government was ramshackle and limited and when monarchs in neighboring countries faced internal problems that jeopardised their thrones. Such was the case with Elizabeth's rival, Mary, Queen of Scots, whom she imprisoned in 1568 and eventually had executed in 1587. After the short reigns of Elizabeth's brother and sister, her 44 years on the throne provided valuable stability for the kingdom and helped forge a sense of national identity. 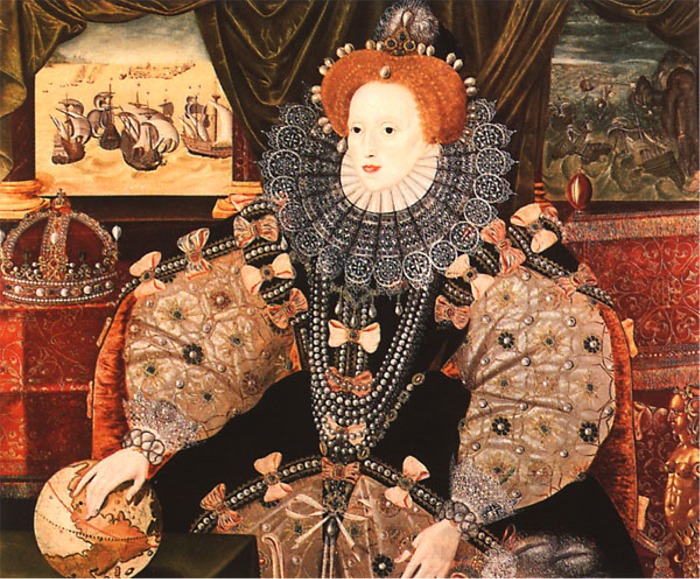 Elizabeth I of England, the Armada Portrait, Woburn Abbey (George Gower, ca 1588). Other versions of the Armada portrait are by different artists.