His father King Charles I was executed at Whitehall on 30 January 1649, at the climax of the English Civil War. The English Parliament did not proclaim Charles II king at this time, passing instead a statute making such a proclamation unlawful. England entered the period known to history as the English Interregnum or the English Commonwealth and the country was a de facto republic, led by Oliver Cromwell. On the other hand, Scotland was then still a separate kingdom and the Parliament of Scotland proclaimed Charles II King of Scots on 5 February 1649 in Edinburgh. He was crowned King of Scots at Scone on 1 January 1651. Following his defeat by Cromwell at the Battle of Worcester on 3 September 1651, Charles fled to the continent and spent the next nine years in exile in France, the United Provinces and the Spanish Netherlands.

A political crisis following the death of Cromwell in 1658 resulted in Charles being invited to return and assume the thrones in what became known as the Restoration. Charles II arrived on English soil on 25 May 1660 and entered London on his 30th birthday, 29 May 1660. After 1660, all legal documents were dated as if Charles had succeeded his father in 1649. Charles was crowned King of England and Ireland at Westminster Abbey on 23 April 1661.

Charles's English parliament enacted anti-Puritan laws known as the Clarendon Code, designed to shore up the position of the re-established Church of England. Charles acquiesced to the Clarendon Code even though he himself favored a policy of religious tolerance. The major foreign policy issue of Charles's early reign was the Second Anglo-Dutch War. In 1670, Charles entered into the secret treaty of Dover, an alliance with his first cousin King Louis XIV of France under the terms of which Louis agreed to aid Charles in the Third Anglo-Dutch War and pay Charles a pension, and Charles promised to convert to Roman Catholicism at an unspecified future date. Charles attempted to introduce religious freedom for Catholics and Protestant dissenters with his 1672 Royal Declaration of Indulgence, but the English Parliament forced him to withdraw it. In 1679, Titus Oates's revelations of a supposed "Popish Plot" sparked the Exclusion Crisis when it was revealed that Charles's brother and heir (James, Duke of York) was a Roman Catholic. This crisis saw the birth of the pro-exclusion Whig and anti-exclusion Tory parties. Charles sided with the Tories, and, following the discovery of the Rye House Plot to murder Charles and James in 1683, some Whig leaders were killed or forced into exile. Charles dissolved the English Parliament in 1679, and ruled alone until his death on 6 February 1685. He converted to Roman Catholicism on his deathbed.

Charles was popularly known as the Merrie Monarch, in reference to both the liveliness and hedonism of his court and the general relief at the return to normality after over a decade of rule by Oliver Cromwell and the Puritans. Charles's wife, the Portuguese princess Catherine of Braganza, was barren, but Charles acknowledged at least 12 illegitimate children by various mistresses. 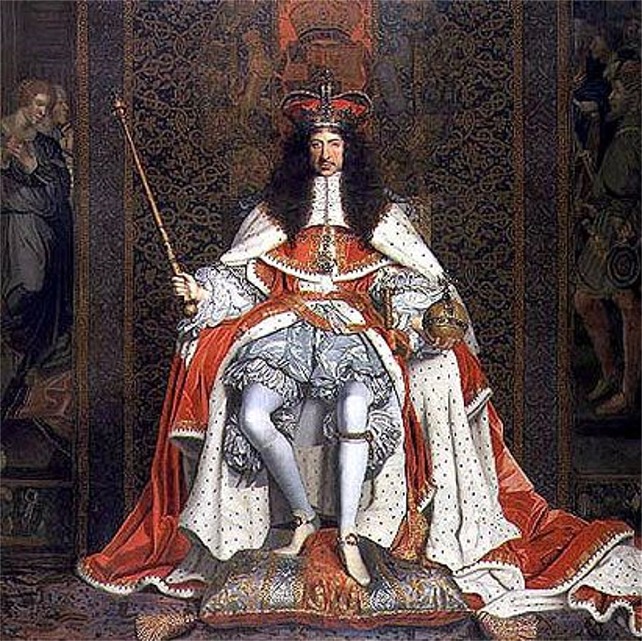 The Restoration under Charles II restored peace after the Civil War.