Leadenhall Market is a covered market in the City of London, located at Gracechurch Street but with vehicular access also available via Whittington Avenue to the north and Lime Street to the south and east and additional pedestrian access via a number of narrow passageways.

The market dates back to the 14th century. It is open weekdays from 7am until late, and primarily sells fresh food; among the vendors there are cheesemongers, butchers and florists. Originally a meat, game and poultry market, it stands on what was the centre of Roman London. A number of commercial retailers are also located in the market, including clothes shops and a pen shop.

The ornate roof structure, painted green, maroon and cream, and cobbled floors of the current structure, designed in 1881 by Sir Horace Jones (who was also the architect of Billingsgate and Smithfield Markets), make the market a tourist attraction. It was used to represent the area of London near The Leaky Cauldron and Diagon Alley in the film Harry Potter and the Philosopher's Stone, and is featured in the films The Imaginarium of Doctor Parnassus, Hereafter, and Love Aaj Kal. It is also popular among local City workers.

The main entrance to the market is on Gracechurch Street. The double height entrance is flanked by tall, narrow gabled red brick and Portland stone blocks in a C17 Dutch style. The adjacent buildings to the south have a continuous retail frontage which is punctuated by narrow entrances to pedestrian ways into the market.

From 1990 to 1991 the market received a dramatic redecoration which transformed its appearance, enhancing its architectural character and detail. The redecoration scheme received a special mention in the Civic Trust Awards 1994. The market is a Grade II* Listed Building, being listed in 1972.

A photograph of Leadenhall Market London 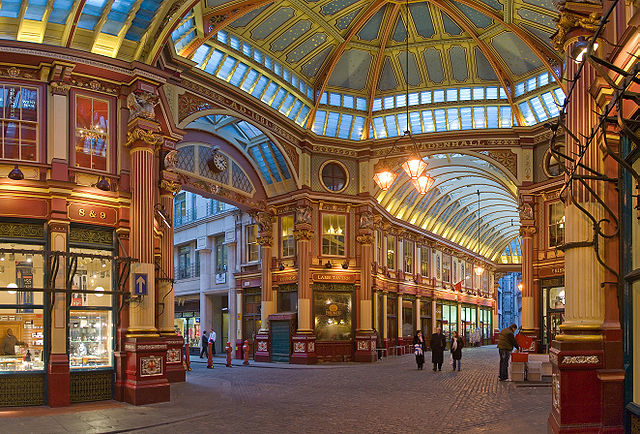