Trafalgar Square Temporarily
grassed over in May 2007

Trafalgar Square is a public space and tourist attraction in central London, England, United Kingdom built around the area formerly known as Charing Cross. It is in the borough of the City of Westminster. At its centre is Nelson's Column, which is guarded by four lion statues at its base. There are a number of statues and sculptures in the square, with one plinth displaying changing pieces of contemporary art. The square is also used for political demonstrations and community gatherings, such as the celebration of New Year's Eve.

The name commemorates the Battle of Trafalgar (1805), a British naval victory of the Napoleonic Wars over France. The original name was to have been "King William the Fourth's Square", but George Ledwell Taylor suggested the name "Trafalgar Square".

In the 1820s, George IV engaged the architect John Nash to redevelop the area. Nash cleared the square as part of his Charing Cross Improvement Scheme. The present architecture of the square is due to Sir Charles Barry and was completed in 1845.

Trafalgar Square is owned by the Queen in Right of the Crown, and managed by the Greater London Authority, while Westminster City Council owns the roads around the square, including the pedestrianised area of the North Terrace.

A photograph of Trafalgar Square 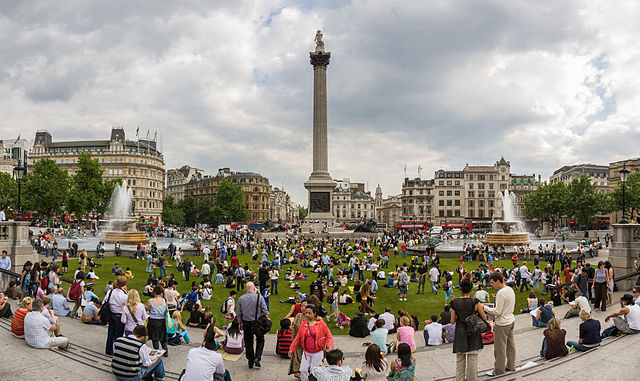