Welcome to our Cleveland map page. The map of Cleveland England that is located below is provided by Google Maps. You can "grab" the electronic map and move it around to re-center the map. You can change between standard map view and satellite map view by clicking the small square on the bottom left-hand corner of the map. Satellite map view utilises orbiting satellite and / or aerial high-resolution photography to display images of the map location to street level detail (really quite amazing). Standard map view shows a traditional street map (also known as a road map). You can use the zoom buttons on the bottom right-hand side of the map to zoom in or out to street level detail. We have digital online maps for most towns and cities on the Maps of England page. We also have a good collection of old school printable maps on the Maps of England page.

A map of Cleveland, England

I hope you like the Cleveland County, England street map / road map situated above.

Cleveland was a ceremonial county located in northern England. It was created in 1974 under the Local Government Act 1972, named after a historic area in Yorkshire, including land from Hartlepool to between Redcar and Whitby. The county was abolished in 1996.

NUTS statistical regions of the United Kingdom were also introduced in 1974. This caused South Humberside to be put with the reformed counties using the name Yorkshire, to form Yorkshire and Humber. South Tees came under North East of England region.

A Bill as originally presented in November 1971 that intended the administrative county to have been an extended form of the then present county borough of Teesside , an independent district in the North Riding from 1968 to 1974. On 1 April 1974, by the Local Government Act 1972, most of the then Cleveland constituency and Hartlepool were incorporated as the Cleveland non-metropolitan county.

The area was partitioned between the four boroughs of Hartlepool, Stockton-on-Tees, Middlesbrough and Langbaurgh-on-Tees, the latter of which took its name from the former Langbaurgh East. The county town was Middlesbrough. The administrative county bordered County Durham to the north and North Yorkshire to the south, and it faced the North Sea to the east. Cleveland had atotal area of 225 square miles (583 km2).

Local government reorganisation, recommended by the Banham Review and accepted by the government, meant that each district borough be re-organised into separate unitary authorities with the Tees be re-established as a ceremonial border between North Yorkshire and County Durham. The county district boroughs of Cleveland were re-organised into Hartlepool, Stockton-on-Tees, Middlesbrough and Redcar and Cleveland. The reorganisation meant that Stockton-on-Tees became the only local authority in England to be split between two counties.

This split was contested by Cleveland County Council, who applied for judicial review over the decision. According to the Minister, David Curry, in the Commons debate on the order on 11 January 1995, this caused a delay from 1 April 1995 as the reorganisation date to 1 April 1996.

As the first of the Orders to be laid before Parliament, it was done in two stages. The Cleveland (Structural Change) Order 1995 had the main effect of abolishing the County Council, whilst the Cleveland (Further Provision) Order 1995 abolished the actual administrative county, creating four new (non-metropolitan) unitary authorities coterminous with each of the boroughs. A division was forced by the Opposition, on the first Order, with 310 in favour and 223 in opposition. Of Cleveland's 6 MPs, Mo Mowlam and Frank Cook (both Labour) voted against, with Tim Devlin and Michael Bates (both Conservative) voted for. Stuart Bell and Peter Mandelson (both Labour) were present at the debate but did not vote. 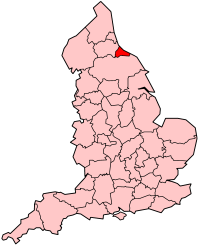