Welcome to our Norfolk map page. The map of Norfolk England that is located below is provided by Google Maps. You can "grab" the electronic map and move it around to re-center the map. You can change between standard map view and satellite map view by clicking the small square on the bottom left-hand corner of the map. Satellite map view utilises orbiting satellite and / or aerial high-resolution photography to display images of the map location to street level detail (really quite amazing). Standard map view shows a traditional street map (also known as a road map). You can use the zoom buttons on the bottom right-hand side of the map to zoom in or out to street level detail. We have digital online maps for most towns and cities on the Maps of England page. We also have a good collection of old school printable maps on the Maps of England page.

A map of Norfolk, England

I hope you like the Norfolk County, England street map / road map situated above.

The Broads is a network of rivers and lakes in the east of the county, extending south into Suffolk. The area is not a national park although it is marketed as such. It has similar status to a national park, and is protected by the Broads Authority.

The area that was to become Norfolk was settled in pre-Roman times, with camps along the higher land in the west, where flints could be quarried. A Brittonic tribe, the Iceni, emerged in the 1st century BC. The Iceni revolted against the Roman invasion in AD 47, and again in 60 led by Boudica. The crushing of the second rebellion opened the area to the Romans. During the Roman era roads and ports were constructed throughout the area and farming was widespread.

Situated on the east coast, the homelands of the Iceni were vulnerable to attacks from continental Europe and other parts of Britain, and forts were built to defend against raids by the Saxons and the Picts. A period of depopulation, which may have been due to these threats, seems to have followed the departure of the Romans. Soon afterward, Germanic peoples from the North Sea area settled in the region. Though they became known as Angles, they were likely not affiliated to any tribe in particular at the time of their migration. It is thought that the settlement here was early (possibly beginning at the start of the fifth century, thereby preceding the alleged date of Hengist and Horsa's arrival in Kent) and that it occurred on a large scale.

By the 5th century the Angles had established control of the region and later became the "north folk" and the "south folk"; hence "Norfolk" and "Suffolk". Norfolk, Suffolk and several adjacent areas became the kingdom of East Anglia (one of the heptarchy), which later merged with Mercia and then with Wessex. The influence of the early English settlers can be seen in the many place names ending in "-ham", "-ingham" and "-ton". Endings such as "-by" and "-thorpe" are also fairly common, indicating Danish toponyms: in the 9th century the region again came under attack, this time from Danes who killed the king, Edmund the Martyr. Several place names around the Fenland area contain Celtic elements; this has been taken by some scholars to represent a possibly significant concentration of Britons in the area.

In the centuries before the Norman Conquest the wetlands of the east of the county began to be converted to farmland, and settlements grew in these areas. Migration into East Anglia must have been high: by the time of the Domesday Book survey it was one of the most densely populated parts of the British Isles. During the high and late Middle Ages the county developed arable agriculture and woollen industries. Norfolk's prosperity at that time is evident from the county's large number of medieval churches: out of an original total of over one thousand some 659 have survived, more than in any other county in Britain and the greatest concentration in the world. The economy was in decline by the time of the Black Death, which dramatically reduced the population in 1349.

Kett's Rebellion occurred in Norfolk during the reign of Edward VI, largely in response to the enclosure of land by landlords, leaving peasants with nowhere to graze their animals, and to the general abuses of power by the nobility. It was led by Robert Kett, a yeoman farmer, who was joined by recruits from Norwich and the surrounding countryside. His group numbered some 16,000 by the time the rebels stormed Norwich on 29 July 1549 and took the city. Kett's rebellion ended on 27 August when the rebels were defeated by an army under the leadership of John Dudley, 1st Duke of Northumberland at the Battle of Dussindale. Some 3,000 rebels were killed. Kett was captured, held in the Tower of London, tried for treason, and hanged from the walls of Norwich Castle.

By the late 16th century Norwich had grown to become the second-largest city in England, but over one-third of its population died in the plague epidemic of 1579, and in 1665 the Great Plague again killed around one-third of the population. During the English Civil War Norfolk was largely Parliamentarian. The economy and agriculture of the region declined somewhat. During the Industrial Revolution Norfolk developed little industry, except in Norwich which was a late addition to the railway network.

In the 20th century the county developed a role in aviation. The first development in airfields came with the First World War; there was then a massive expansion during the Second World War with the growth of the Royal Air Force and the influx of the American USAAF 8th Air Force which operated from many Norfolk airfields. Entrance to Norfolk at Walsoken, Wisbech on the Cambridgeshire and Norfolk County boundary.

The local Army regiments were the Royal Norfolk Regiment and the Norfolk Yeomanry.

During the Second World War agriculture rapidly intensified, and it has remained very intensive since, with the establishment of large fields for growing cereals and oilseed rape. 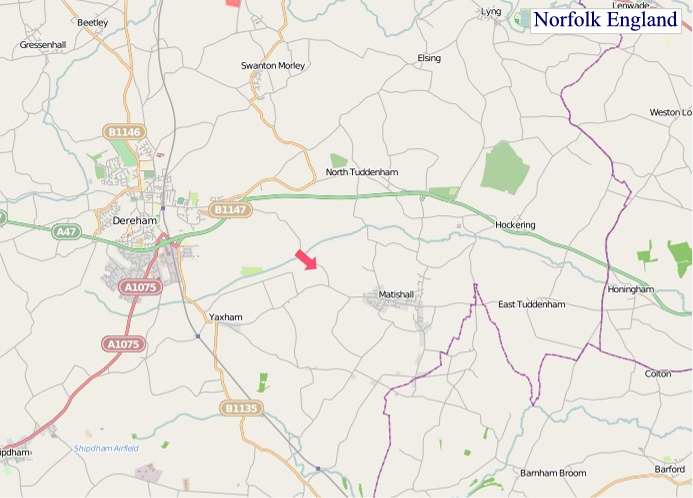 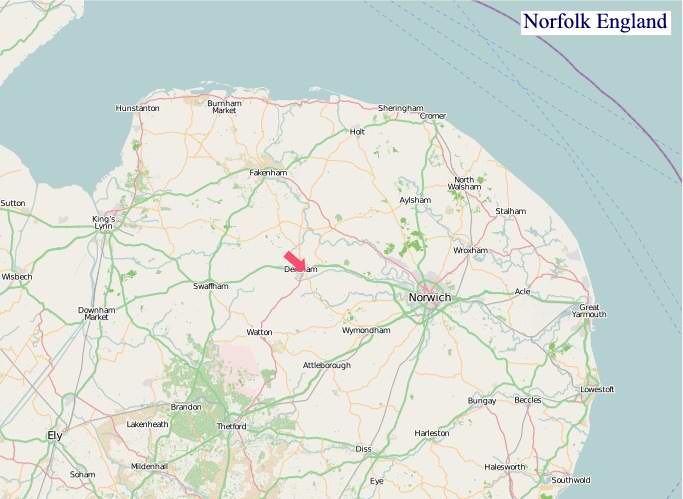 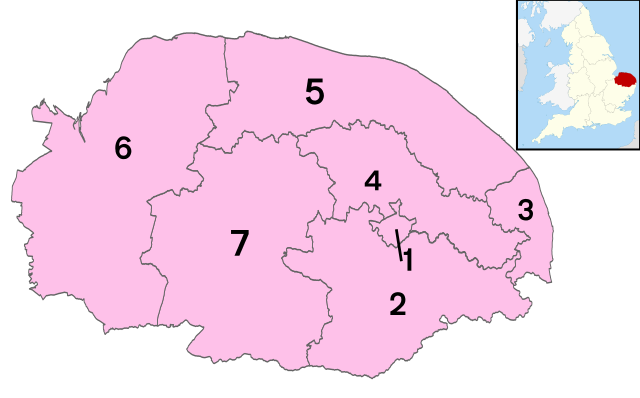