Tower Bridge is a combined bascule and suspension bridge in London, England, over the River Thames. It is close to the Tower of London, which gives it its name. It has become an iconic symbol of London. Tower Bridge is one of several London bridges owned and maintained by the City Bridge Trust, a charitable trust overseen by the City of London Corporation.

The bridge consists of two towers which are tied together at the upper level by means of two horizontal walkways which are designed to withstand the horizontal forces exerted by the suspended sections of the bridge to the left and the right. The vertical component of the forces in the suspended sections and the vertical reactions of the two walkways are carried by the two robust towers. The bascule pivots and operating machinery are housed in the base of each tower. Its present colour dates from 1977 when it was painted red, white and blue for the Queen's Silver Jubilee. Before this, it was painted a chocolate brown colour.

Tower Bridge is sometimes mistakenly referred to as London Bridge, which is actually the next bridge upstream. A popular urban legend is that in 1968, Robert McCulloch, the purchaser of the old London Bridge that was later shipped to Lake Havasu City, Arizona, believed mistakenly that he was buying Tower Bridge. This was denied by McCulloch himself and has been debunked by Ivan Luckin, the seller of the bridge. 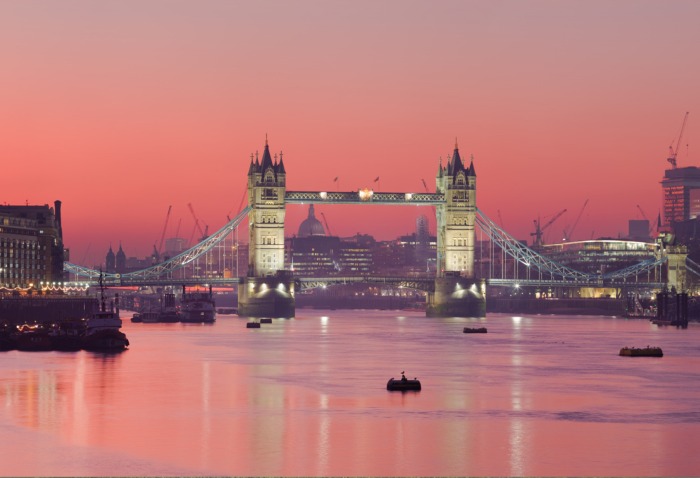 This is a derivative image. I cropped the original.