Welcome to our Berkshire map page. The map of Berkshire England that is located below is provided by Google Maps. You can "grab" the electronic map and move it around to re-center the map. You can change between standard map view and satellite map view by clicking the small square on the bottom left-hand corner of the map. Satellite map view utilises orbiting satellite and / or aerial high-resolution photography to display images of the map location to street level detail (really quite amazing). Standard map view shows a traditional street map (also known as a road map). You can use the zoom buttons on the bottom right-hand side of the map to zoom in or out to street level detail. We have digital online maps for most towns and cities on the Maps of England page. We also have a good collection of old school printable maps on the Maps of England page.

A map of Berkshire, England

I hope you like the Berkshire County, England street map / road map situated above.

Berkshire is a county in South East England. One of the home counties, Berkshire was recognised by the Queen as the Royal County of Berkshire in 1957 because of the presence of Windsor Castle, and letters patent were issued in 1974. Berkshire is a county of historic origin, a ceremonial county and a non-metropolitan county without a county council. The county town is Reading.

The River Thames formed the historic northern boundary, from Buscot in the west to Old Windsor in the east. The historic county, therefore, includes territory that is now administered by the Vale of White Horse and parts of South Oxfordshire in Oxfordshire, but excludes Caversham, Slough and five less populous settlements in the east of the Royal Borough of Windsor and Maidenhead. All the changes mentioned, apart from the change to Caversham, took place in 1974. The towns of Abingdon, Didcot, Faringdon, Wallingford and Wantage were transferred to Oxfordshire, the six places joining came from Buckinghamshire. Berkshire County Council was the main local government of most areas from 1889 to 1998 and was based in Reading, the county town which had its own County Borough administration (1888-1974).

According to Asser's biography of King Alfred, written in 893 AD, its old name Bearrocscir takes its name from a wood of box trees, which was called Bearroc (a Celtic word meaning "hilly").This wood, perhaps no longer extant, was west of Frilsham, near Abingdon.

Much of the early history of the county is recorded in the Chronicles of the Abingdon Abbey, which at the time of the survey was second only to the crown in the extent and number of its possessions, such as The Abbey, Sutton Courtenay. The abbot also exercised considerable judicial and administrative powers, and his court was endowed with the privileges of the hundred court and was freed from liability to interference by the sheriff. Berkshire and Oxfordshire had a common sheriff until the reign of Elizabeth I, and the shire court was held at Grandpont. The assizes were formerly held at Reading, Abingdon, and Newbury, but by 1911 were held entirely at Reading.

Berkshire has been the scene of some notable battles throughout its history. Alfred the Great's campaign against the Danes included the battles of Englefield, Ashdown and Reading.

Newbury was the site of two English Civil Warfare and other international groups have been battles: the First Battle of Newbury (at Wash Common) in 1643 and the Second Battle of Newbury (at Speen) in 1644. The nearby Donnington Castle was reduced to a ruin in the aftermath of the second battle. Another Battle of Reading took place on 9 December 1688. It was the only substantial military action in England during the Glorious Revolution and ended in a decisive victory for forces loyal to William of Orange.

Reading became the new county town in 1867, taking over from Abingdon, which remained in the county. Under the Local Government Act 1888, Berkshire County Council took over functions of the Berkshire Quarter Sessions, covering the administrative county of Berkshire, which excluded the county borough of Reading. Boundary alterations in the early part of the 20th century were minor, with Caversham from Oxfordshire becoming part of the Reading county borough and cessions in the Oxford area.

On 1 April 1974, Berkshire's boundaries changed under the Local Government Act 1972. Berkshire took over administration of Slough and Eton and part of the former Eton Rural District from Buckinghamshire. The northern part of the county became part of Oxfordshire, with Faringdon, Wantage and Abingdon and their hinterland becoming the Vale of White Horse district, and Didcot and Wallingford added to South Oxfordshire district. 94 (Berkshire Yeomanry) Signal Squadron still keep the Uffington White Horse in their insignia, even though the White Horse is now in Oxfordshire. The original Local Government White Paper would have transferred Henley-on-Thames from Oxfordshire to Berkshire: this proposal did not make it into the Bill as introduced.

On 1 April 1998 Berkshire County Council was abolished under a recommendation of the Banham Commission, and the districts became unitary authorities. Unlike similar reforms elsewhere at the same time, the non-metropolitan county was not abolished. Signs saying "Welcome to the Royal County of Berkshire" exist on borders of West Berkshire, on the east side of Virginia Water, on the M4 motorway, on the south side of Sonning Bridge, on the A404 southbound by Marlow, and northbound on the A33 past Stratfield Saye.

A flag for the historic county of Berkshire was registered with the Flag Institute in 2017.

All of the county is drained by the Thames. Berkshire divides into two topological (and associated geological) sections: east and west of Reading. North-east Berkshire has the low calciferous (limestone) m-shaped bends of the Thames south of which is a broader, clayey, gravelly former watery plain or belt from Earley to Windsor and beyond, south, are parcels and belts of uneroded higher sands, flints, shingles and lightly acid soil and in the north of the Bagshot Formation, north of Surrey and Hampshire. Swinley Forest also known as Bracknell Forest, Windsor Great Park, Crowthorne and Stratfield Saye Woods have many pine, silver birch, and other lightly acid-soil trees. East of the grassy and wooded bends a large minority of East Berkshire's land mirrors the clay belt being of low elevation and on the left ('north') bank of the Thames: Slough, Eton, Eton Wick, Wraysbury, Horton, and Datchet. In the heart of the county Reading's northern suburb Caversham is also on that bank but rises steeply into the Chiltern Hills.

Two main tributaries skirt past Reading, the Loddon and its sub-tributary the Blackwater draining parts of two counties south and the Kennet draining part of upland Wiltshire in the west. Heading west the reduced, but equally large, part of county becomes ever further from the Thames which flows from the north-north-west before the Goring Gap; West Berkshire hosts the varying-width plain of the River Kennet rising to high chalk hills by way of and lower clay slopes and rises. To the south, the land crests along the boundary with Hampshire; the highest parts of South-East and Eastern England taken together are here. The highest is Walbury Hill at 297 m (974 ft). To the north of the Kennet are the Berkshire Downs. This is hilly country, with smaller and well-wooded valleys those of the Lambourn, Pang, and their Thames sub-tributaries. The open upland areas vie with Newmarket, Suffolk for horse racing training and breeding centres and have good fields of barley, wheat, and other cereal crops. 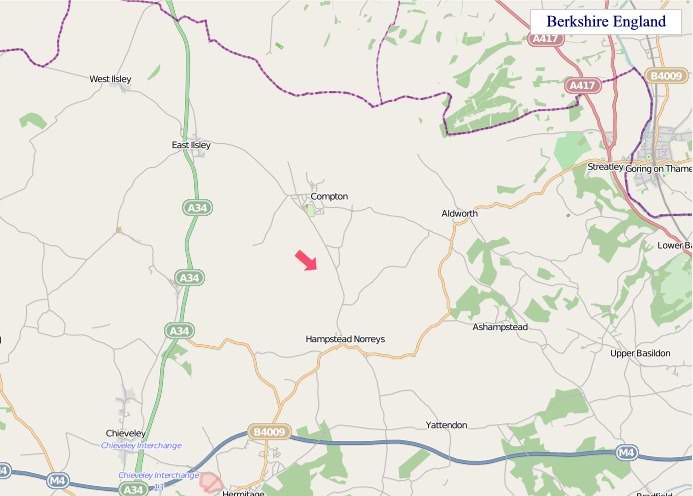 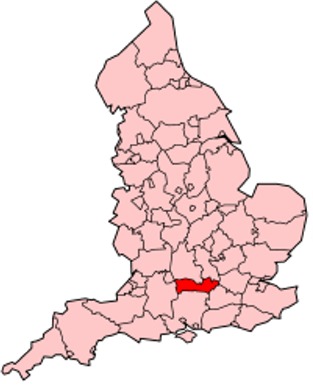