Welcome to our Buckinghamshire map page. The map of Buckinghamshire England that is located below is provided by Google Maps. You can "grab" the electronic map and move it around to re-center the map. You can change between standard map view and satellite map view by clicking the small square on the bottom left-hand corner of the map. Satellite map view utilises orbiting satellite and / or aerial high-resolution photography to display images of the map location to street level detail (really quite amazing). Standard map view shows a traditional street map (also known as a road map). You can use the zoom buttons on the bottom right-hand side of the map to zoom in or out to street level detail. We have digital online maps for most towns and cities on the Maps of England page. We also have a good collection of old school printable maps on the Maps of England page.

A map of Buckinghamshire, England

I hope you like the Buckinghamshire County, England street map / road map situated above.

Buckinghamshire is one of the Home Counties, the counties of England that surround Greater London. Towns such as High Wycombe, Amersham, Chesham and the Chalfonts in the east and southeast of the county are parts of the London commuter belt, forming some of the most densely populated parts of the county. Development in this region is restricted by the Metropolitan Green Belt. Other large settlements include the county town of Aylesbury, Marlow in the south near the Thames and Princes Risborough in the west near Oxford. Some areas without direct rail links to London, such as around the old county town of Buckingham and near Olney in the northeast, are much less populous. The largest town is Milton Keynes in the northeast, which with the surrounding area is administered as a unitary authority separately to the rest of Buckinghamshire. The remainder of the county is administered by Buckinghamshire Council as another unitary authority. In national elections, Buckinghamshire is considered a reliable supporter of the Conservative Party.

A large part of the Chiltern Hills, an Area of Outstanding Natural Beauty, runs through the south of the county and attracts many walkers and cyclists from London. In this area older buildings are often made from local flint and red brick. Many parts of the county are quite affluent and like many areas around London this has led to high housing costs: several reports have identified the market town of Beaconsfield as having among the highest property prices outside London. Chequers, a mansion estate owned by the government, is the country retreat of the incumbent Prime Minister. To the north of the county lies rolling countryside in the Vale of Aylesbury and around the Great Ouse. The Thames forms part of the county's southwestern boundary. Notable service amenities in the county are Pinewood Film Studios, Dorney rowing lake and part of Silverstone race track on the Northamptonshire border. Many national companies have head-offices or major centres in Milton Keynes. Heavy industry and quarrying is limited, with agriculture predominating after service industries.

The name Buckinghamshire is Anglo-Saxon in origin and means The district (scire) of Bucca's home. Bucca's home refers to Buckingham in the north of the county, and is named after an Anglo-Saxon landowner. The county has been so named since about the 12th century; however, the county has existed since it was a subdivision of the kingdom of Mercia (585-919).

The history of the area predates the Anglo-Saxon period and the county has a rich history starting from the Brythonic and Roman periods,[citation needed] though the Anglo-Saxons perhaps had the greatest impact on Buckinghamshire: the geography of the rural county is largely as it was in the Anglo-Saxon period. Later, Buckinghamshire became an important political arena, with King Henry VIII intervening in local politics in the 16th century and just a century later the English Civil War was reputedly started by John Hampden in mid-Bucks.

Historically, the biggest change to the county came in the 19th century, when a combination of cholera and famine hit the rural county, forcing many to migrate to larger towns to find work. Not only did this alter the local economic situation, it meant a lot of land was going cheap at a time when the rich were more mobile and leafy Bucks became a popular rural idyll: an image it still has today. Buckinghamshire is a popular home for London commuters, leading to greater local affluence; however, some pockets of relative deprivation remain.

The expansion of London and coming of the railways promoted the growth of towns in the south of the county such as Aylesbury, Amersham and High Wycombe, leaving the town Buckingham itself to the north in a relative backwater. As a result, most county institutions are now based in the south of the county or Milton Keynes, rather than in Buckingham.

The county can be split into two sections geographically. The south leads from the River Thames up the gentle slopes of the Chiltern Hills to the more abrupt slopes on the northern side leading to the Vale of Aylesbury and the Borough of Milton Keynes, a large and relatively level expanse of land that is the southern catchment of the River Great Ouse. 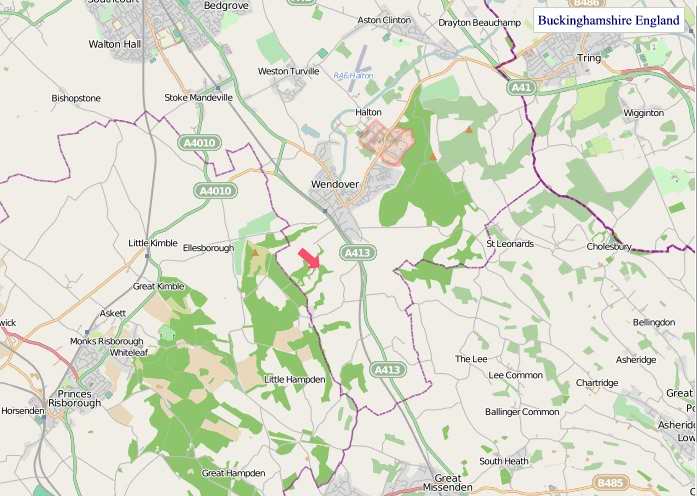 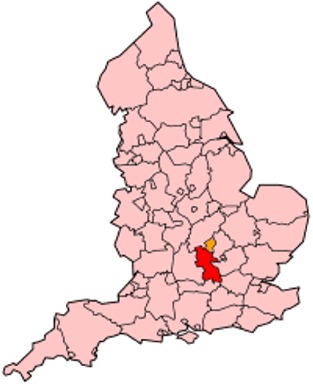 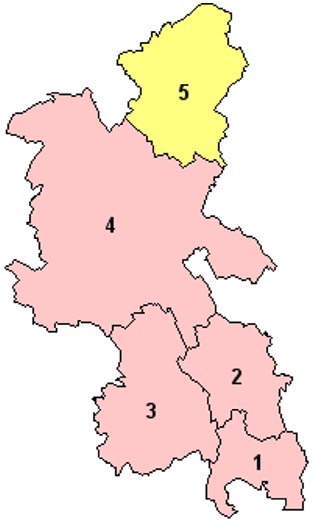